By Sujan Industries In Aerospace 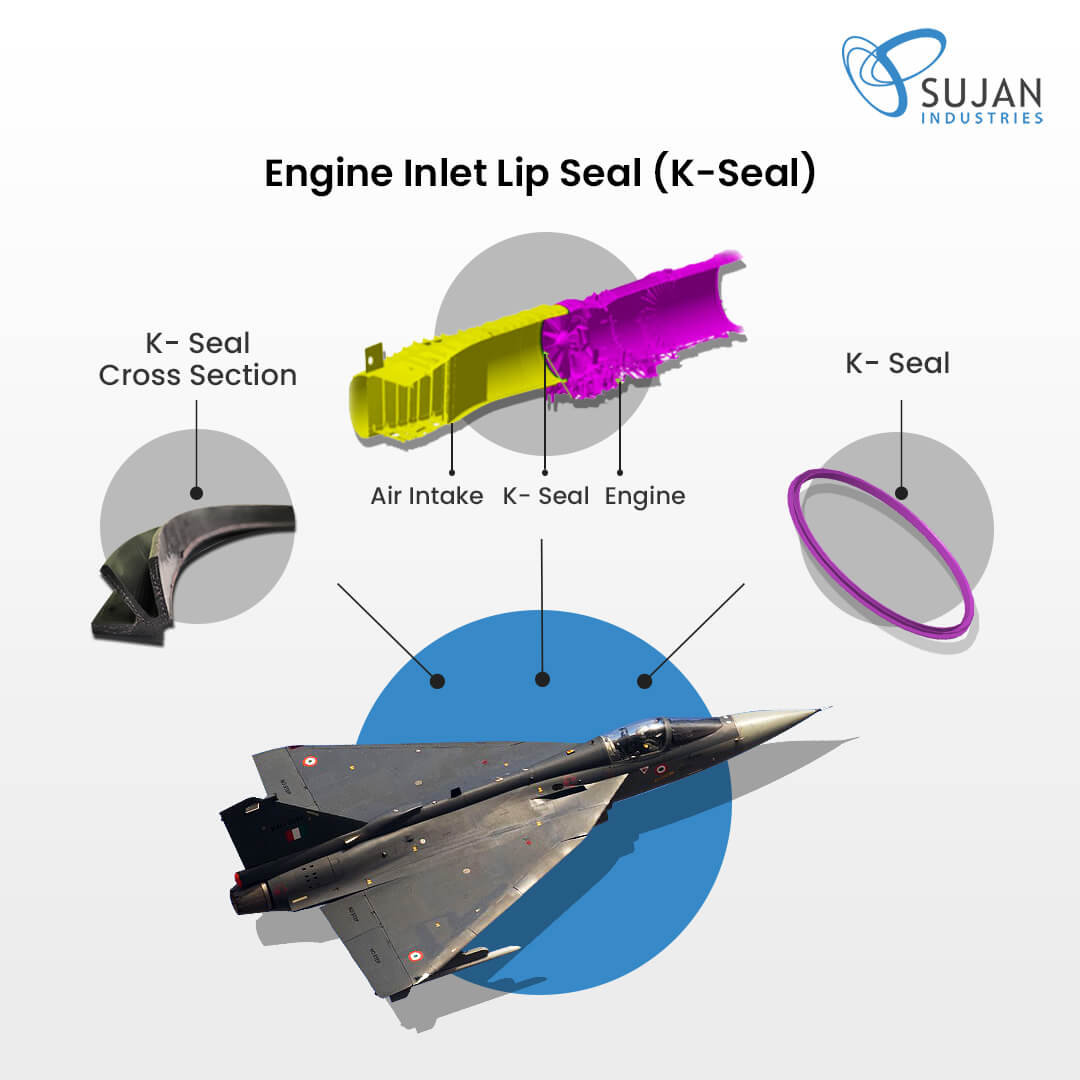 What is an Engine Inlet Lip Seal (K-seal)?

Engine Inlet Lip Seal (K-seal) is an extremely high-performing and static seal that is used to provide sealing between the engine and air intake and prevent air leakage. Due to its excellent sealing performance to any other static seals, they are mostly used in critical applications like aircraft etc.

What is the construction of a K-seal?

The K-seals are reinforced with a single or multilayer of Nylon fabric with elastomer to enhance the strength. There are three lobes in the shape of the letter K of the engine inlet lip seal. The primary lobe is attached to the seating on the Fuselage frame and is connected to it with backup support that uses a metallic retainer ring. The other two lobes rest against the lip of the engine, thereby making such an arrangement that is leak-proof.

What are the functions of a K-seal?

K-seal is a very critical sealing application product that is used in LCA aircraft to provide sealing between the engine and airframe air intake and prevent air leakage. It also acts as a non-metallic contact between engine and airframe.

Sujan Industry has been the leading name in the field of Aerospace and Defence parts manufacturers in India for many years. We produce and supply excellent quality products for various critical applications. With our in-house machines, equipment, testing facilities, and experienced technical engineers, we have efficiently developed and delivered premium quality engine inlet lip seal for HAL LCA Tejas MK1. Tejas is the second supersonic fighter developed by HAL and designed by ADA. It is a single-engine aircraft with multirole light fighters made in India.

However, these super powerful fighter aircraft have used the K-seals from Sujan Industries. Not only that, we have received approval from the Aeronautical Development Agency (ADA) for the efficient development and validation of the engine inlet slip seal for the LCA MK1 vehicle. Developing and validating this fibre reinforced air intake or engine inlet lip seal for the LCA aircraft was a critical and lengthy process where Sujan Industries has closely worked together with ADA and DRDO to qualify all the necessary examinations and testing’s like material testing, leakage test, aging test, etc. and receive the type approval.

Not only that, but we have also received a project for the development and supply of the K-seal or Engine Inlet Lip Seal for the LCA MK2 from ADA. This seal is great at securing the engine and the airframe, the engine air intake and stopping air leakage between the airframe and the engine intake.

Our Contribution to the Aerospace Industry

We at Sujan Industries are delighted to be associated with the Ministry of Defence, Government of India, to develop and supply such critical application seals and many other items for various aircraft. We craft and deliver the best quality rubber products to the aerospace industry that can sustain critical weather conditions like exposure to extreme temperatures, oils, gases etc. Our product range includes all the aircraft rubber products like O-rings, Seals, Gaskets, Grommet, Piston, Washers, Rubberized plunger & Valves, Protective Boots & bellows etc. which are manufactured to stringent aerospace standards and as per customer requirement. All our products are developed keeping in mind optimum safety and quality standards. We have been awarded several times by HAL over the years for our dedicated service and for meeting their quality requirement for critical applications.

Get in touch with us to know more about our offerings in the Aerospace & Defence Industry and to get the perfect manufacturing solution for any critical application items.